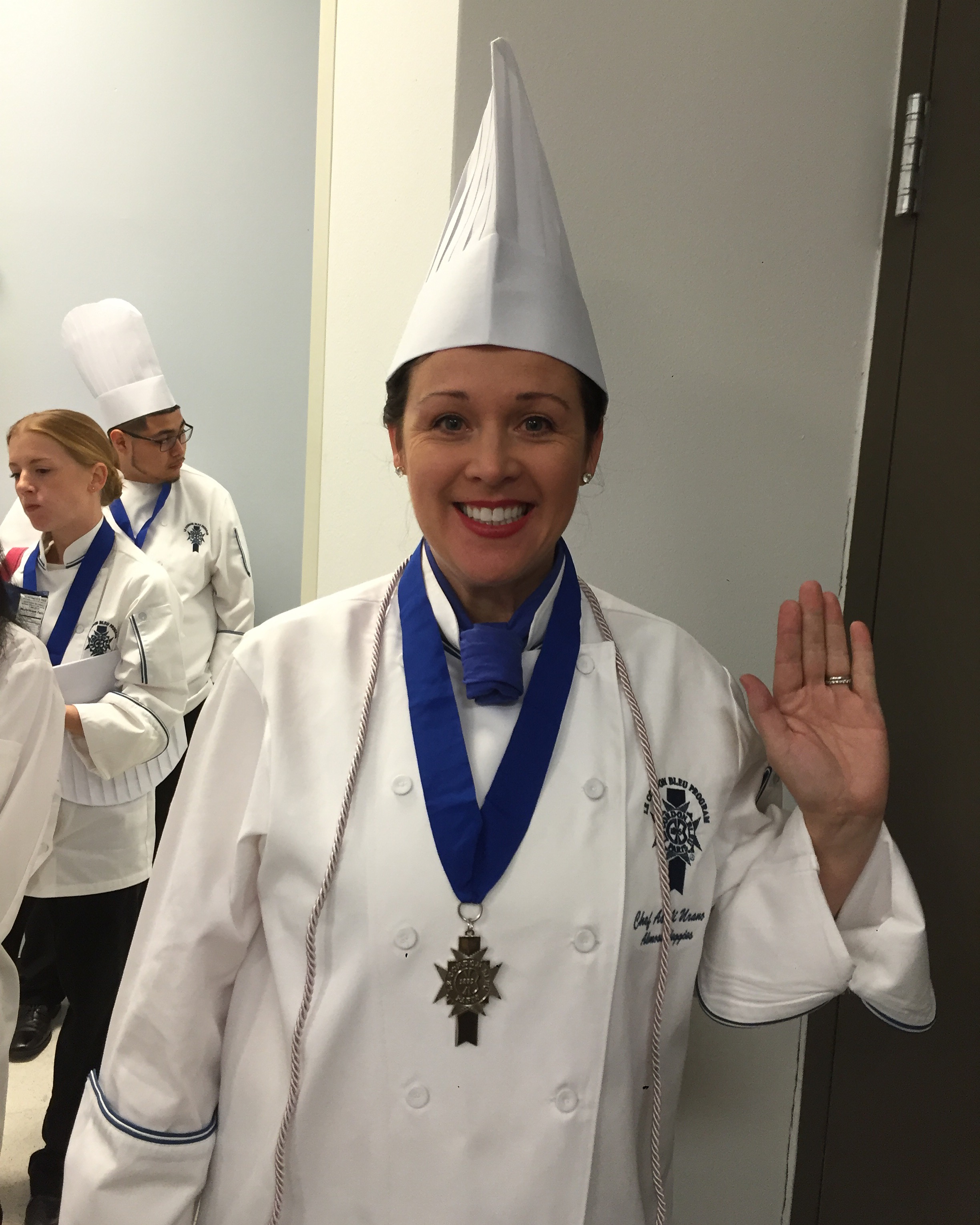 Le Cordon Bleu graduation was January 9th. The entire internet was invited, even though rules specifically stated no more than ten people per graduate. Most of the time it is best to be a rule-follower. Sometimes the best rule-follower in the history of following rules can’t do it.

Graduates had to arrive earlier than the entire invited internet, as well as each person’s family. All parts of my brain were consumed with how to put on my graduation chef coat in the car without wrinkling it. That’s the moment the sky opened, as choirs of angels began singing, upon noticing they offered none other than— valet.

People inside were standing in line to check-in. All parts of my brain were now consumed with the honors cord that belonged around my neck. Would it be there? Did they forget? Would all honors cord dreams be smashed like the character of my ex-boyfriend who cheated with a terrycloth-dress-wearing Hooters girl?

After signing the sign-in sheet, someone handed over a small piece of paper. Usually these sheets of paper mean 1) you need to pay your tuition or 2) someone needs to talk to you about something before being allowed to move on with your life.

The person in charge of dealing with graduation student problems took the paper from my cold, sad, no honors cord hand. She then said, “We need to know where you are cooking. There is nothing in your file. What are you planning to do?” Um, continue writing James Beard award worthy articles on Dallas’ most under-appreciated food blog. True story.

After accepting this living-the-dream answer, suddenly, after three years and an unexpected six extra weeks of school to get .03% higher GPA, it happened. Lights shined through the graduation building windows, even though it was raining, as a stranger handed over the graduation honors cord of complete and total glory.

Please do not tell anyone, but I went straight to the restroom to stare at the above mentioned honors cord perfectly placed over my chef coat. This was the moment I realized my name was embroidered on the wrong side of the chef coat. Double wow.

I found out three hours late that the top of graduation chef hats should be open, um,  for those who frown upon looking like a KKK member. Note to self.

With the help of having a honors cord, there was nothing wrong in the world at all. Someone in charge began telling everyone to get in line according to our number. My number was 56. Everyone was talking really loud and (shocker) not listening to directions. Who doesn’t listen to directions during culinary school graduation? Holy cow. Hardly anyone listened during class, but graduation day misbehaving? Say it isn’t so.

We had one practice that really wasn’t a practice. We walked into the auditorium and sat in our seats, but most students were out of order. Deciding not to worry about this was the right thing to do. People were still talking, so I used my super hero hearing reserved for this kind of situation to hear part of the instructions. This is when we were told we weren’t really going to practice. We actually watched one girl walk over, get her degree, shake the school president’s hand, smile at the camera, shake two other people’s hands, and exit the stage.

Before receiving our pretend paper diploma, graduates who earned honors, by having an outstanding GPA, were told to stand when our name was announced. Oh, this was the big one. Standing before an entire audience waiting to cheer for students who studied hard was finally reality.

Name after name after name was called as each graduate stood with grace. That’s when they all sat down and the speaker moved on to the next part of the program. Wait. What? They really forgot to call my name? Oh. Em. Gee. This moment felt like the tragic slow motion memory of being hit by a car on the way to a basketball game in 6th grade as my shoes flew off into a nearby ditch. Yes, it was equally as tragic. I’d rather never have a Doritos sleeping bag again than not be recognized as honor student worthy. Woe is life.

How many first-world-graduation-problems can one person have? I was sitting on the end of the row, which meant leaning over to whisper to the academic director had to happen. He whispered that he would correct “it” before we all left the stage. He later walked to the podium and announced they forgot to recognize me as graduating with honors. The irony of it all, right?

The chef teacher who needs to take a vacation for at least 6 weeks was in charge of reading each graduate’s name as they walked the walk. He’s the one who called me Veg Head during butchery class and semi-tortured my existence during restaurant rotation class.

After shaking the president’s hand and leaving the stage, the end of the most incredible experience of my life had just happened. Having never cooked before this life-changing adventure began, I can say it was worth every struggle, fail, and triumph. Thank you, Le Cordon Bleu. It’s been swell.