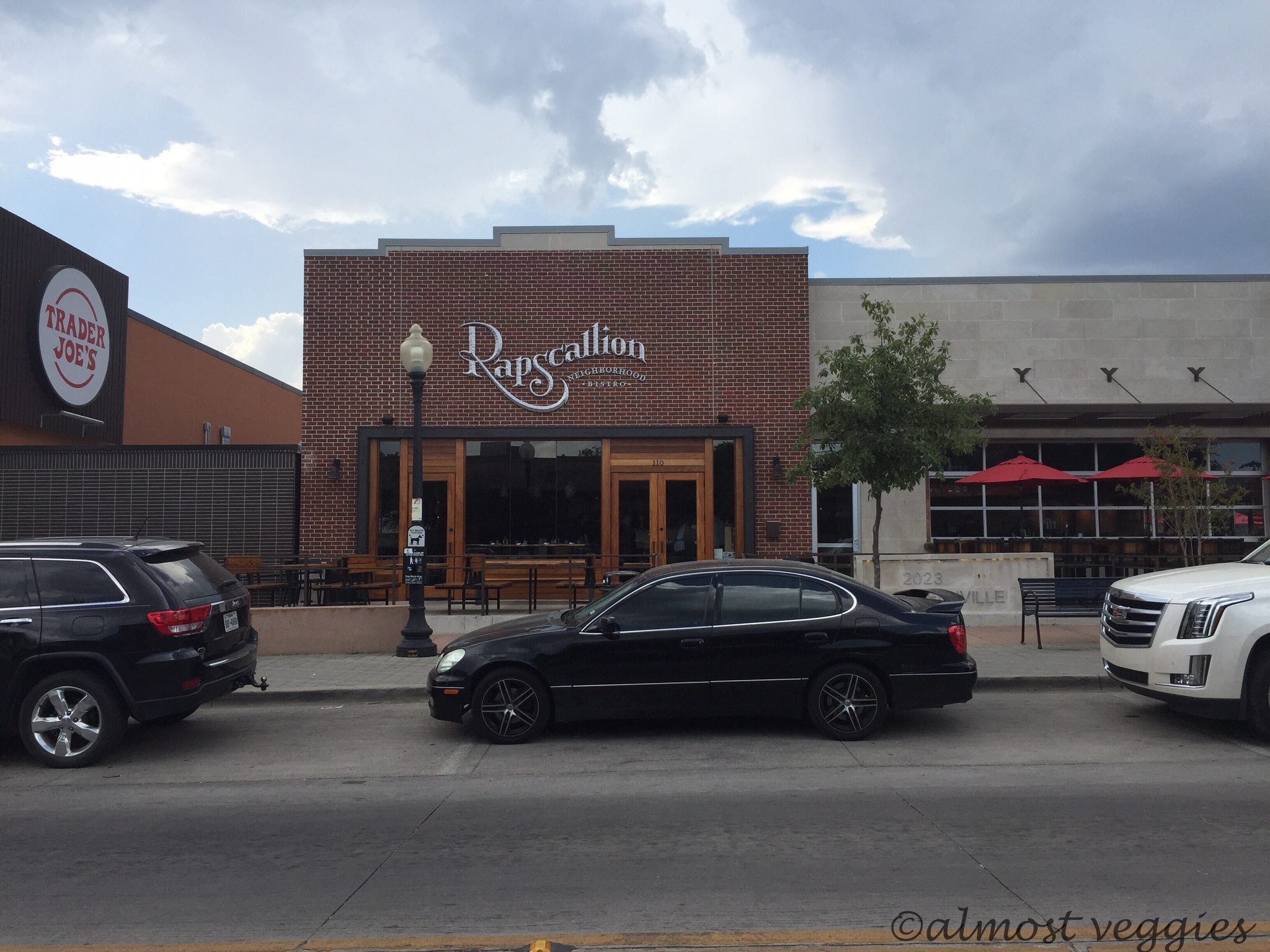 Rapscallion has been 7.4 miles away since July 7th? Come again? Understanding how a brand new restaurant, from chef Nathan Tate of Boulevardier, came into the lives of the living without having a clue is as sad as saying goodbye to my two Chihuahuas forever. Finding out was an accidental gift from the internet yesterday. All of this knowledge occurred exactly 29 minutes before Rapscallion’s doors opened.

After pretending no one would mind that I hadn’t showered, I sped down the street listening to every direction Waze decided to give. There it was– right beside Trader Joe’s. Google let me know Rapscallion opens their doors at 4:30pm, but does not serve dinner until 5:30pm. Since reservations seem annoyingly important around Dallas, this was all great news. Grabbing a seat at the bar for dinner was a slam dunk.

Could there be a person smart enough to automatically know the definition of— Rapscallion? No one around here knew, so asking the internet was the only option. After a full-blown definition investigation, it became clear that rapscallion has nothing to do with scallions. I’m not sure I believe Merriam Webster’s definition because chef Nathan is way too cool to occupy a run-down waterfront or hide someone’s shoes. He does not have time for these things due to tons of responsibility that comes with running kitchens all over the place.

The first moment I needed to calm down came as I began taking pictures of pineapples. These pineapples were a part of some drink process that I’m unaware of. They were so pretty I could have eaten them all as an appetizer, but knew this would be frowned upon by every bartender working.

Another example of knowing for a fact that I should probably walk back to my car and go home happened when I posted four Instagram pictures in a row, including a salt & pepper picture, as well as water. This behavior calls for at least six people unfollowing my account immediately. People who post too many Instagram pictures at once are breaking the #1 Instagram rule that I learned the hard way. A salt & pepper picture might be grounds for account deletion.

The bartender soon told me it was OK to order from the far left side of the menu, which is thirty minutes earlier than being able to order from the middle or right side of the menu. Starters and snacks are to the left which include oysters, coriander cured yellowtail, pickled Gulf shrimp, dry aged ribeye carpaccio, pork belly cracklins, fried pickles, and spiced sweet potato chips, to name a slew.

All I could think about was the grilled cauliflower steak in the middle of the menu. There’s a similar cauliflower dish from Dish that makes life worth living again. I’m almost too hyper to write. If no one had looked I would have licked the plate yesterday. This would have embarrassed someone, somewhere, but I was alone. Being alone means pretending unpleasant things never happened when necessary.

The mac & cheese arrived in a skillet with hot cheese bubbles here and there. It was almost too much to take after the grilled cauliflower steak. This Guinness Book of World Record worthy mac & cheese has creole cream cheese included as an ingredient. Seriously! Wow. Just wow.

Crawfish hush puppies helped me calm down because I don’t get into crawfish at all. They were served with comeback sauce. This comeback sauce tasted like remoulade with a kick. I have no idea what it really was, but that’s just what my tongue told me during dipping. Crawfish people are surely going to enjoy this appetizer.

I decided to order the grass-fed burger to-go with three cheese pimento topped with house pepper bacon and creole mustard. This burger was beautiful. It was like a painting hanging somewhere at a fancy show. Art, people. Art. It’s such a wonderful feeling to have a perfect dining experience without even taking a shower. Throw on a hat and some aluminum free Tom’s deodorant from Whole Foods and get busy eating at Rapscallion.