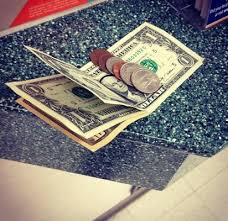 People need to stop licking my grocery store change. Bag licker problems have now moved on to— money lickers. I’ve overly complained to a point every person in America should be aware of this catastrophic saliva sharing epidemic. Some readers have told me to get green by bringing my own bag to the grocery store. This defeats the purpose of helping the rest of the world not have to deal with finger lickers licking all over the place. We cannot ignore this ongoing first world finger licking problem any longer. Why am I the only person fighting this heinous finger licking crime?

Until recently, I’ve been fortunate to not have been violated by finger lickers returning my change. Now there’s this guy at Kroger down the street who keeps licking his thumb and index finger to return my change. I have been forced to have cash after losing my bank card last week. Since I have some kind of grocery store disorder, I can only buy ingredients for one dinner each day. This level of grocery store visits makes my chances of being violated by a licker much higher.

I decided to continue to buy groceries at this particular Kroger, standing in the same speedy checkout line— to somehow make a difference. Trying to make a difference without getting anyone in trouble is the right thing to do. After this guy handed me money with DNA oozing all over the place again, I decided to ask for– the manager. I placed the saliva soaked money on the counter in hopes of exchanging it for less dirty money. “There’s saliva all over my money because someone licked their thumb and index finger to force the bills to stick for faster pickup.” The manager’s face suddenly made a face letting me know he thought this act of licking was gross. He quickly said, “That’s disgusting! Money is very dirty! Who did this?” Really? We all know money is dirty. What about the customer’s feelings of mental saliva anguish? This should be at the top, Mr.

There’s no way I was going to tell the identity of the finger licking employee. No way. I asked the manager if Kroger has the little sticky pad purposely invented to help people not hurt customer’s feelings with their spit. He said they do have these pads and also let me know he would discuss this disgusting saliva sharing phenomenon during Kroger’s next staff meeting.

As of yesterday, not much has changed. In an amazing turn of events, the guy that licked my money is now none other than— a bagger. Who moves a money licker to bagging groceries? Does the manager think this will solve anyone’s licking problem? He’s bagging in the fast lane? Are you people non-smart? His licking level of stress is higher now, which means he has more problems than before. I will not stop until every finger licker has been cured. If every customer would help one business with finger lickers, then the world would be a better place. It’s like a contribution to society.